Welcome to the Able And Game recap of the Masterchef Australia Thursday Night Elimination Challenge.

The show opens to the Masterchef house pre elimination shot of everyone waking up.

Gordon Ramsay, the man who cut short Gordon week by a day has set this challenge, and Gina is anxious even thought Gordon isn't here anymore.
Gary says they are probably still reeling from cyclone Gordon. Special mention goes to Brendan's cute as parka. 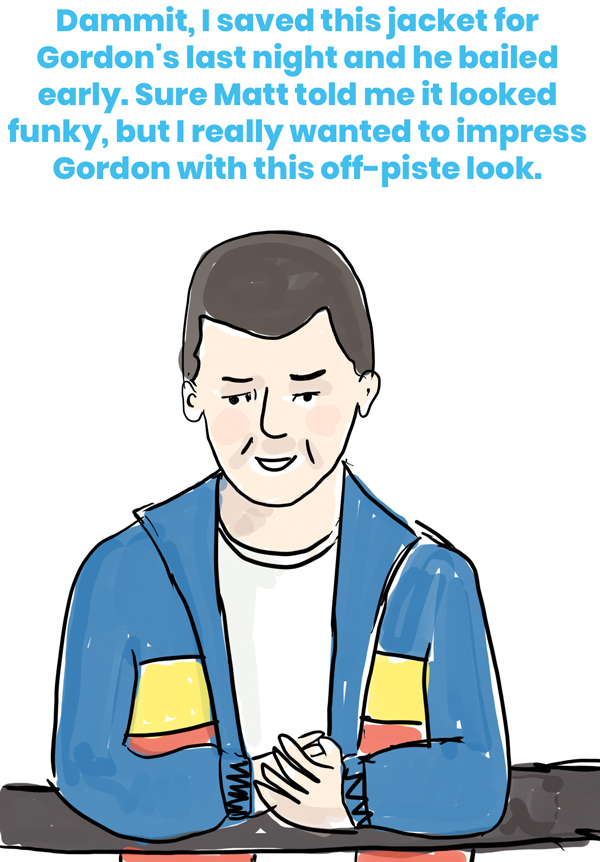 The big question everyone is asking, one we already know the answer to due to the channel ten promo, will Loki play the pin? We figure why would you, his odds are good, a 1/9 chance of going home. Roll the dice Loki, back yourself!

Today’s elimination is a pressure test. What is it normally? It is normally a weird challenge where some people are declared safe then 3-5 people cook something, and the worst goes home.

Today’s chef is the only Australian chef to win three Michelin stars. He is from Gordon’s restaurant in London, uninspiringly called Gordons. It’s Matt Abe.

The dish today is hard and has a lot of technical elements. They are cooking Matt’s Roast chicken, summer vegetables and consommé. 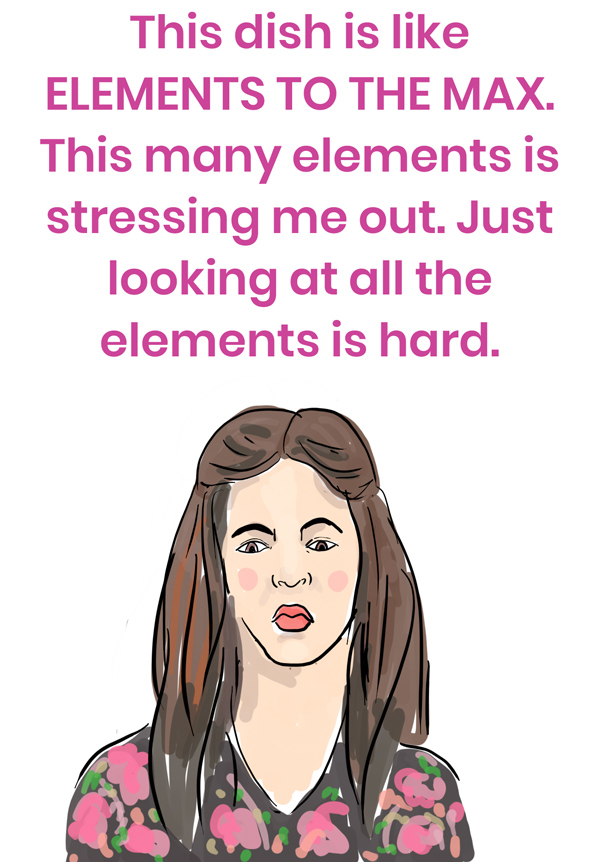 The dish is basically a chicken breast with a green mousse stuffed between the chicken and the skin, sliced on the diaganol. There is a bunch of vegetables and edible flowers and then a consommé is poured over it all.. Everyone tastes it and agrees it is delicious.

They are told to take note of the ratio of mousse to breast.

Loki realises the judges are going to comment on his decision not to play the pin every 3-5 minutes in this 3 hour cook.

Jo loves following recipes, it is her preferred way to cook. The other way to cook is throw everything in a pot and hope for a miracle. The fact that Jo has suddenly got a speaking role makes me worried she is going home.

Contestants are processing chicken in the mixer until it is mush. It’s a mini chicken nugget factory, until we remember they are making perhaps the fanciest chicken dish in the world.

Loki asks what the Parson’s nose is and Lisa tells him it is the arse. 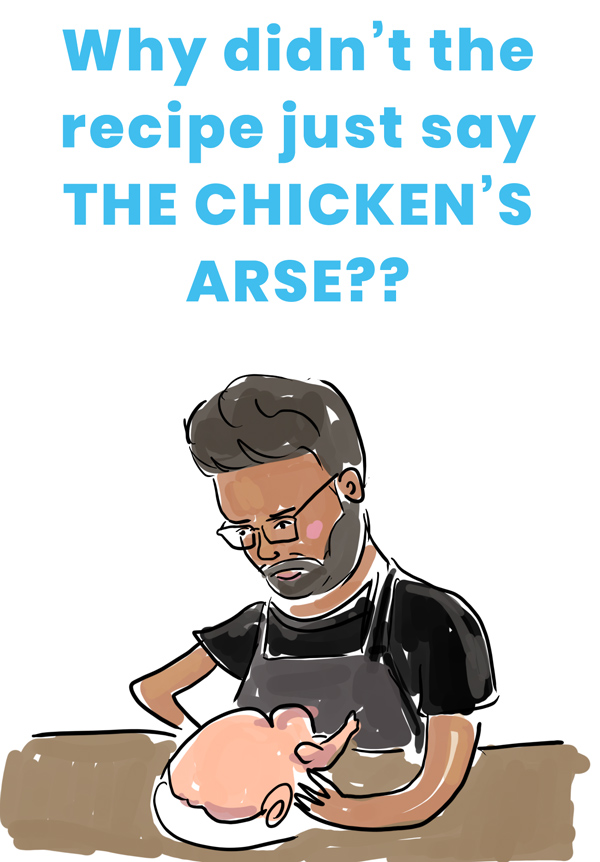 Everyone is skinning the chicken, which needs to be kept intact otherwise the mousse can leak out. If they put a hole in it they will be in real trouble. Everyone is trying not to break the skin, but surely someone will break it. Who will that be?

I am confused as to why, up until this point, Jo has said barely two sentences, she is funny.

Loki’s wheels are falling off.

Jo is using the cleaver on the chicken and getting all her anger out. 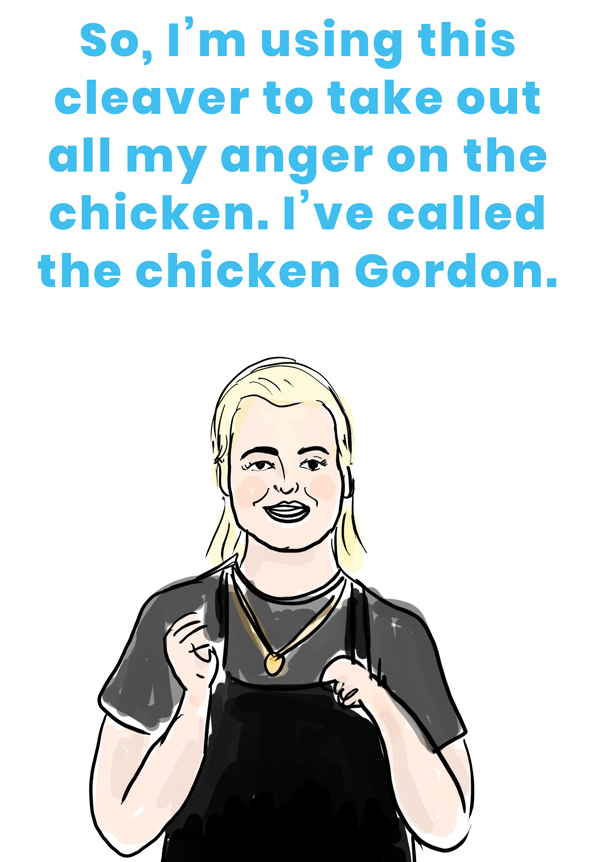 More Loki problems. He’s not browning the chicken properly, he's scared he will burn it and George tells him he won’t. George then tells Loki to stop panicking but he has a look on his face that says he wasn’t panicking until George told him not to panic and what should be be panicking about?

Everyone starts making herb oil, which is really green.

Ben tells us what the raft is for a consommé. It’s basically a chunky, frothy egg white cleaning gunge that turns your meat juice clear by removing all the impurities. Have you ever made a raft at home? No. The only people in Australia who have made rafts at home are currently on the TV right now.

Lisa says Kristen’s chicken looks so good. So good for a baby in a more obscure David Lynch film. 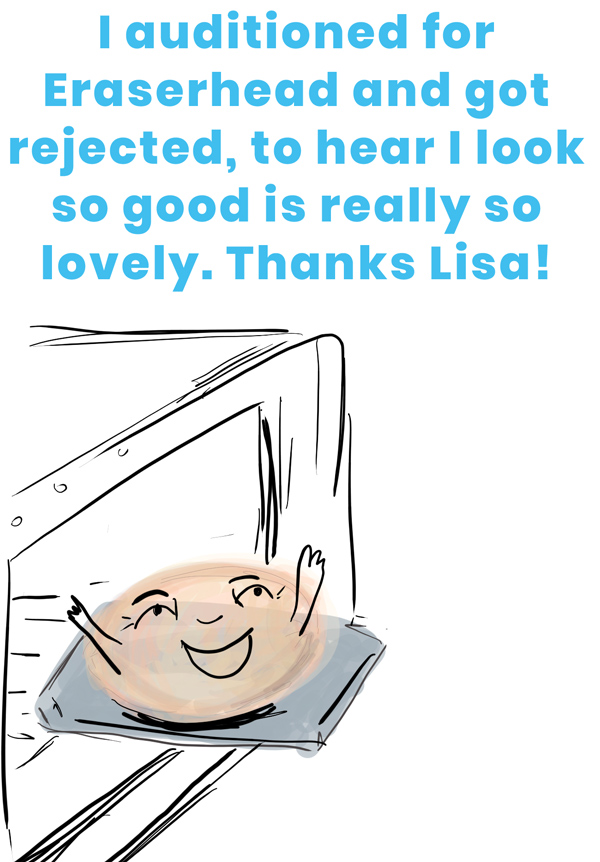 Sarah is now panic stations and her chicken might not have enough time to cook.

Everyone becomes frantic as they enter the final stages of the cook and Loki goes and spills his consommé all over the 7 pages of recipe. Thankfully he still has a tiny bit left.

The cook finishes and Jo tells Gina that if she ever comes over for dinner she shouldn’t expect this dish, it will be pots and parmas. 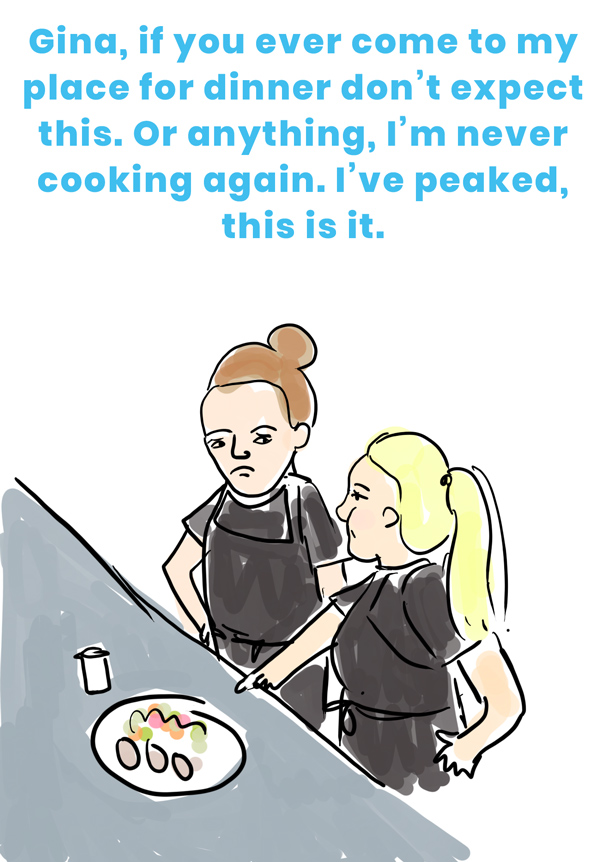 Jo
She gave it everything she has and has had a great day in the kitchen.
It is her favourite and best cook so far. The judges say the dish looks like Matt’s.
Gary: it’s the chicken that catches you eyes though, look at the colour.
Grins all around!
Matt says Jo is a woman under control.

Aldo
Too much mousse!

Chloe
Not enough mousse!
Not ready to go home!
The absence of mousse is a question mark.
Consommé is watery.

Question: who is ever ready to go home? Other than the winner on the day they win?

Ben
It’s been an amazing cook, just as amazing as cooking with Gordon.
He is happy with his consommé.
Uplifting music plays.
Consommé is amazing, Matt would serve it in his restaurant.
Beautifully moist.

Gina
Did they taste her dish? My notes say no and I'm not going to go back and rewatch. I am going to phone it in and assume she is in the middle of the road Samira/Kristen zone.

Sarah
Is concerned because she was manic in the kitchen and is worried her veg will have colour and the chicken will be overcooked.
George finds it hard to cut through the chicken and the judges are concerned it is overcooked.
The chicken is over cooked.
Upside: consommé is good.

The lack of detail might cost her, but wait Matt, George says there is one last dish and the ads have told us that tonight Loki is probably going home.

Loki
Loki is worried because he made lots of mistakes.

Loki says he could be the first to go home with a pin
Matt asks if him if, in retrospect, not playing the pin was a bad idea. He says no because of the following Masterchef formula:
kids+tears+proud = why

The chicken is dry, the mousse is grainy. Herby oil lacks punch. Consommé lacks flavour. Vegetables are rushed, the radish still has its hair on it. It’s a plethora of fails for Loki.

The judges ponder this, and Gary says it is lineball. I am confused, it feels pretty clear to me.


Verdict
Gordon’s restaurant Matt, not Matt Matt, says everyone should be proud.

Best Dishes
Ben’s consume was worthy of being served in Gordon’s restaurant
BUT ……
That wasn’t dish of the day, that went to Jo, which explains all her air time. YAY

So Loki is obviously going home and everyone is devo because he has a pin.

Worst Dishes
Sarah overcooked the chicken
Chloe had next to no mousse
Loki’s everything was terrible, including his decision not to use the pin. 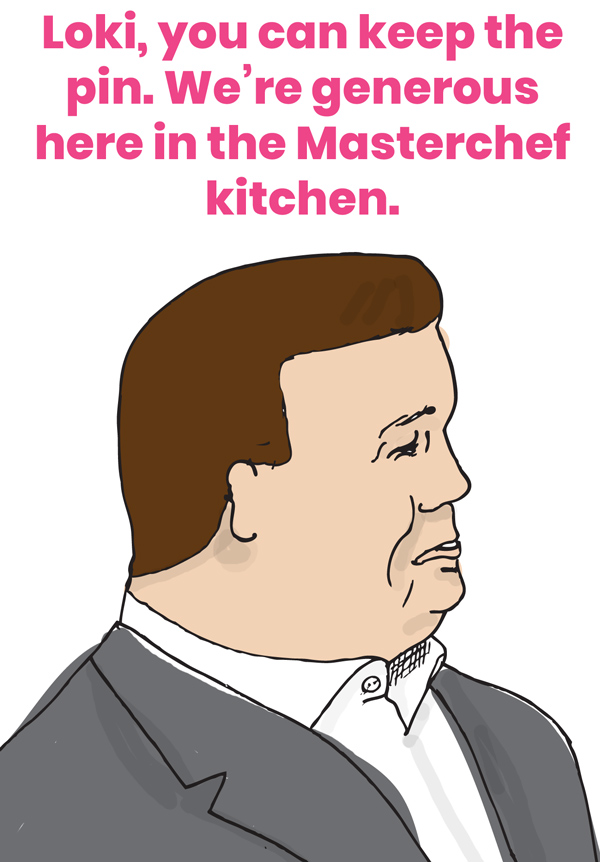 Gary tells him, in a tone indicating he should feel proud, that he has made Masterchef history for being the only dimwit to go home with a pin. Gary doesn’t stop there, he tells him he can keep the pin as a stark reminder of his dimwittery. So generous Gary!

Loki says he has no regrets.

Coming up on Sunday night: Kitchen relay. Or as I like to call it Please Don’t White Chocolate Volute My Dish John.
#MASTERCHEF