Cards We Will Never Make 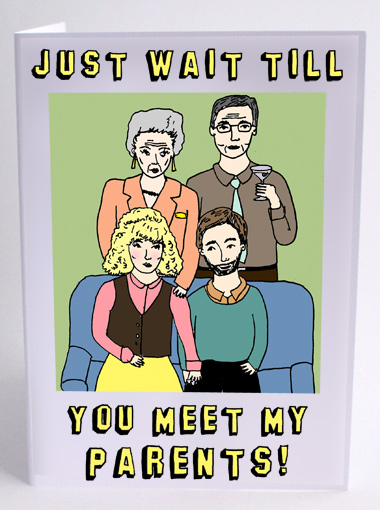 I've been having a few discussions with people about how good would it be if they made a Mad Men spin off show based on Sally Draper set in the '80s. She would be in her late 20s, early 30s and most likely make for interesting television.
The other night Gareth and I were watching When Harry Met Sally, most likely adding it to webflicks late one night after drinking too much wine. While we were watching it we noticed Meg Ryan sounded just like Betty Draper in a few scenes, then I realised, this isn't Betty this is Sally starring in the TV show I've dreamed about! A lot of disbelief had to be suspended, and the real Sally would be much more interesting but imagine the scene where Harry is introduced to Betty and Don! With a mother like that you come to understand why one would start shrieking in Katz's Deli.
So we thought we would design another card we will never make about meeting the parents in law. Plus it was kind of fun to imagine what Betty would be wearing in the 1980s.