Game On Game: Which? 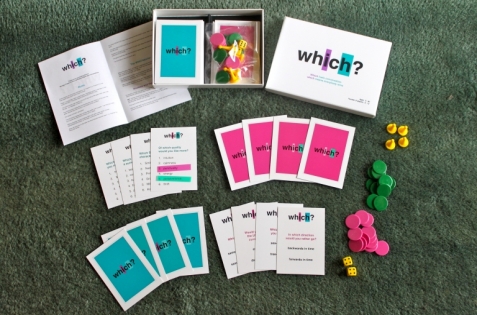 A few weeks ago I rocked up to meet Gareth at Rose Street late on a Sunday afternoon and he was next to a stall selling a game called Which? Stuart, the man who designed and made the game, had the idea in his head for the last 20 years and spent the last few months designing and making it. I know I'm one of the many people who have had lofty ideas of making my own board game, but how often do you meet someone who has actually gone out and done it?

The game works by you choosing between two options from a question card and everyone else guessing what you have chosen. You can play in teams or individually with the first team/person to reach 30 correct answers the winner. We played it the other night with 5 people (odd number - so we played as individuals) and despite having people who were total strangers before the night we were all able to compete and had some interesting conversations. Some of the questions are rather interesting, for example: would you rather die before or after your partner? (Gareth guessed this one wrong by the way) and by the end of the game we had learnt some interesting things about one another.

Next month we will have two games of Which? to give away in our newsletter, so if you're not on the mailing list you can join by entering your email on the form on the left hand side, or you can buy directly off the website here.


Cost: $25
How long till you get the hang of it: Right away
Play it when: You have a bunch of people over for dinner
(from 4-8 people would be ideal)
Platform: Old School (dining table, lounge room)
IQ Improvement: 0
Addictiveness: Medium
Honeymoon is over: When the wine runs out