A Range Of Cards From Start To Finish

We recently had a teacher ask for some personalised cards to give out to her pupils and I realised it would be a good idea for a range of cards. The brief I gave myself was six cards that are bright, colourful and cute and would appeal to children.

As I started sketching ideas I thought it could be good to document the progress for the blog. Normally when I work I'm one of those people where the best ideas come at either the last minute or after hours/day/months of pushing through a whole bunch of crap ideas and the frustration that comes with that. I also get obsessed with an idea and have to do it right away, even if there is other things that need doing more urgently. I know if I lose interest I might not be as enthusiastic about it later on. During the 'idea high' it kind of consumes your thoughts like a boy crush, although you might not be prone to giggle about it while sitting on public transport. 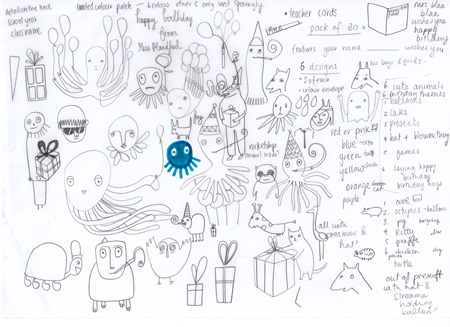 We only have one birthday card that could work for a kid, the rest seem to mention goon or other things that kids don't really get (yet). My plan for the cards was to have 6 different animals doing six different birthday things. Once I got sketching I didn't really like any of the animal drawings much. I don't think I could get past the octopus. I figured if I couldn't get it right then everything else would be even harder. You can click on all of the sketches to see them a bit bigger. 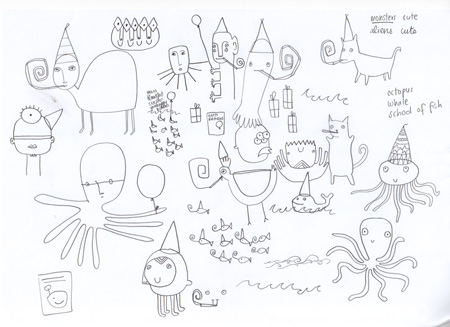 I decided to scrap the animals and go with aliens. I think this decision was a mixture of laziness and creativity. Laziness because it is easier to draw an alien than it is to draw an animal and creativity because I could draw whatever I wanted and make it a little odd. Although I didn't go with the animals, I still like the idea of the octopus with all the balloons and the school of fish with the blower things and might go back to them in the future. 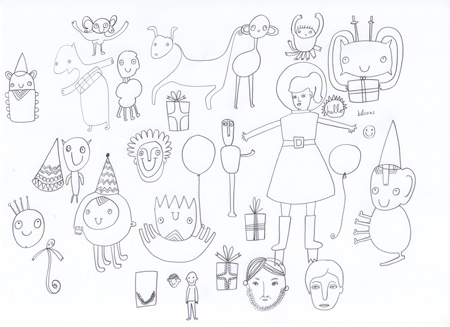 I was pretty much settled on the idea of aliens at this point so drew some ideas for different creatures. Although I was sold on this idea this didn't stop me from drawing lots of other things as well. Once you're in that mindset that what you're doing is right it helps to draw other things as you can come up with another idea that works for something completely different. From the birthday ideas at the start I decided I liked the party hat, balloon and present images. Although I liked the idea of the game, it would be a bit more complicated to illustrate and I wanted to keep the cards really simple. 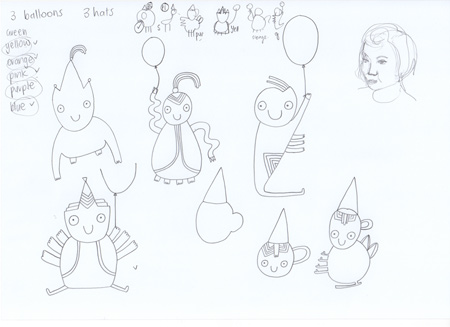 This was the last of my sketching where I was working out which colour things would be and what the aliens would look like. I used the triangle lines to tie them altogether and also have a place to add some other colours. 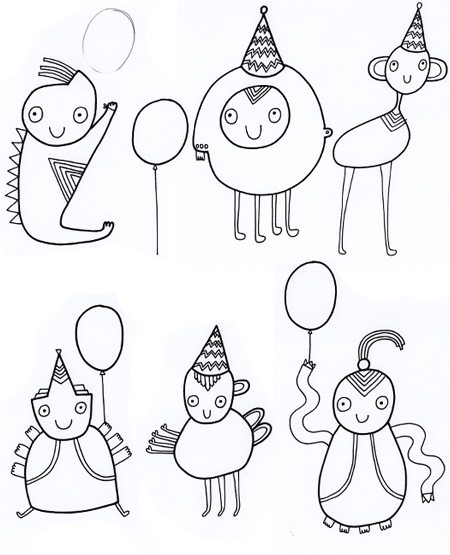 These are the six drawings I did with the fine liner and then have been scanned onto the computer.  I've become particular about the paper and fineliner I use, I don't like the line to have any fuzziness, the smoother the better. Once they are scanned into Photoshop I take them over to Illustrator to clean them up and get the lines nice and smooth. I usually digitally colour in Photoshop, but for this range I used Illustrator. Once I started colouring them it didn't take too long to finish them all and the first one always takes longer than the last. 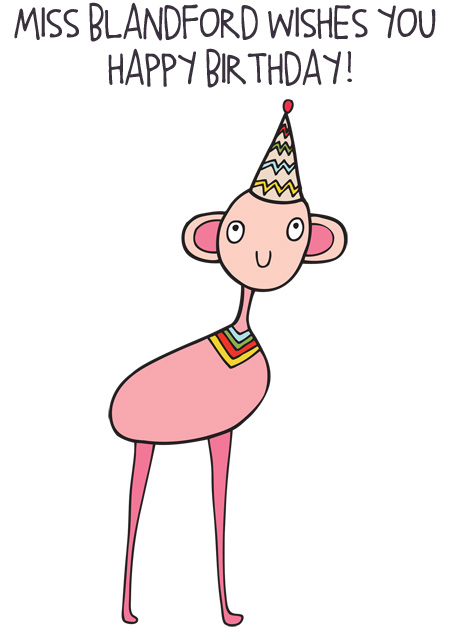 This is one the final designs showing the personalised text. The text is a new typeface I made with my own handwriting (super time saver, I had been handwriting everything previously!).

We will list the personalised teacher range on Etsy in the next day or so. The pack will have 30 cards (5 of each design) and we can also put the class name and school year on the back. The cards will also be available individually just with 'Happy Birthday!' and we also plan to offer packs of 6 at the market. 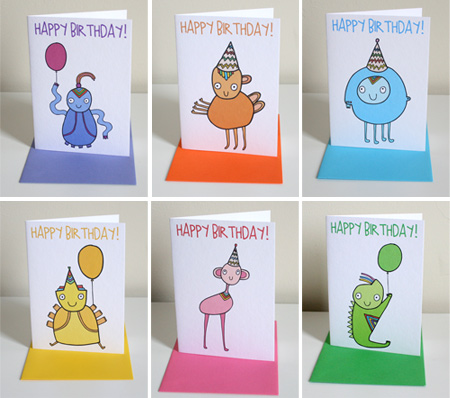 Here are the final six designs with matching envelopes. They are printed on a lovely parchment stock we use for a small range of our cards. It picks up the ink really nice and has a soft texture to it. Which one is your favourite? I think mine is the pink one.