Progress Of A Design

I started working on this design a few weeks ago when I was home sick with a virus. I'd not been sick in ages so it took me by surprise, especially when it was the week before the wedding week, Gareth's Brother had arrived and the rest of his family were arriving that weekend. I thought it would be a productive week of work, house cleaning and wedding organising. Instead it was a sad sack week of watching TV and films, eating whatever I could muster up in the house and working on card designs.

I'm guessing I also had mild wedding fever when I designed this card, but wedding cards really is a catagory we need to add more designs to. I wanted something fairly simple and thought the idea of the couple holding hands would work well as a design. Drawing the hands however was tricky as I wanted a ring in there! I showed it to Gareth a few days ago and he pointed out the ring was on the wrong finger. Big whoops! So Gareth and I modeled a shot so I could draw from it (boy does that make things easier). I also redid the lettering for married and life as I felt the first design wasn't as nice as it could have been. I scrapped the blue text as it felt too colourful and changed it to magenta which I think works really well with red. Often when I'm colouring the cards, I just sit and change the colours around until I get something I'm gut happy with.

Oh and the weird fingers were just weird and wrong. Drawing fingers isn't super easy, when you get it right you high five yourself and then kiss all of your own fingers.

The card is up on Etsy. 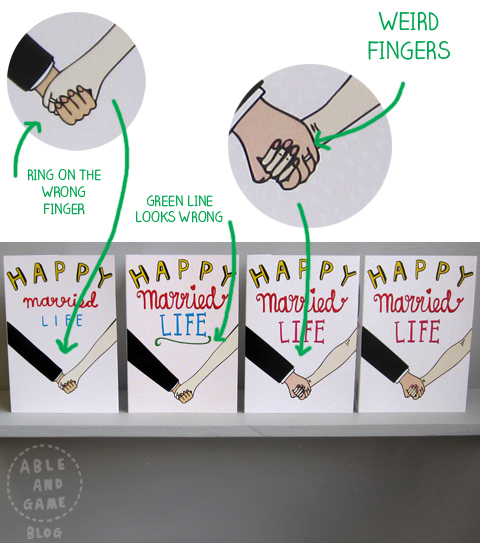