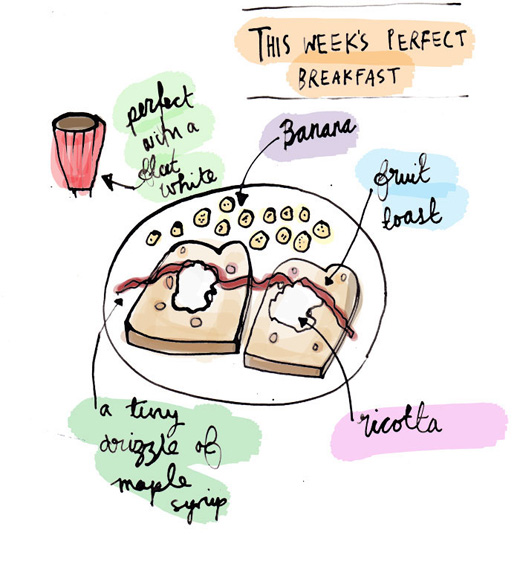 Breakfast is one of those meals I'm super picky about and often avoid because of being such a fussy fuss pot. I don't like cereal much, my rules with toast are rather long* and I can often get stuck in a no-longer-work-at-home-but-wish-I-did morning vortex. So coming up with breakfast options is hard and frustrating so when I found this one (they do it at Rose Street Market) I decided it could be a keeper.

I was at the Queen Vic Market a few weeks back and got some ricotta from there and the guy said it should last about 5 days in the fridge, so perfect for the working week as do the bananas and fruit toast (I got Burgen from the supermarket, it more solid and dense than the normal stuff). So you can get yourself sorted on a Monday and be ready for the next five days, good for a disorganised lazybot like myself that needs things set up and ready to go. As for the Maple Syrup it's best to get the real stuff, it isn't as sugary and you don't need much. I used to loathe it when people would go on about the real stuff, that fake stuff seemed fine to me but I've firmly set up camp with the CAMP stuff.

If you try the recipe out let me know how you go and if you have any adaptation ideas, I've not written it out a recipe as it's just a case of cooking toast and plonking on banana, ricotta and maple. If you have any good breakfast suggestions please send them my way, I want to wage a war on shoddy soggy cereal, that stuff is the worst.