We just finished up our annual trade show Life Instyle on Sunday here in Melbourne. It is the 6th time we have exhibited in Melbourne and it feels like we have come a long way from our little First Instyle stand back in 2009. For those who don't know, Life Instyle is a trade based event where people can showcase their products and shop come along and place orders. So if you have a shop you buy our cards from, there's a strong chance we chat to them at the show.

For this show I wanted to do something a little different, but sadly stand design isn't my strong point. While I can come up with good ideas, actually making them happen is another story. A few years ago I got my Dad to make some A frame stands that were good, but could only hold one card. While I didn't think this would be an issue, if you had a few people in the stand looking at the cards while at the same time someone was placing an order by taking cards off the shelf, it didn't really work. So this time we went back to the Ikea Ribba shelves we used way back in 2010 and had been gathering dust under out bed. They could hold a few cards so it made things much easier.

The sink was aquired by another request to Dad (living on a farm there is always loads of sinks??) but both Gareth and I had worries that it might not work, but I had a vision in my head and often when that happens there isn't much to stop it happening. Whether it happens well is a totally different story. We built a wooden stand to sit behind the sink, sourced the taps a few days later (a friend had some, they were perfect) and the landscape image was a printout from Officeworks with the view looking out from my house back on the farm. I sewed up the bottom sink skirt and the curtains were a last minute a-ha moment I put together during bump in.

When I was putting the photos into my folder I spotted my planning drawing and had a giggle at the side by side so I thought I would share that. It's almost identical!

Now we just have Top Drawer in London next month to plan for! 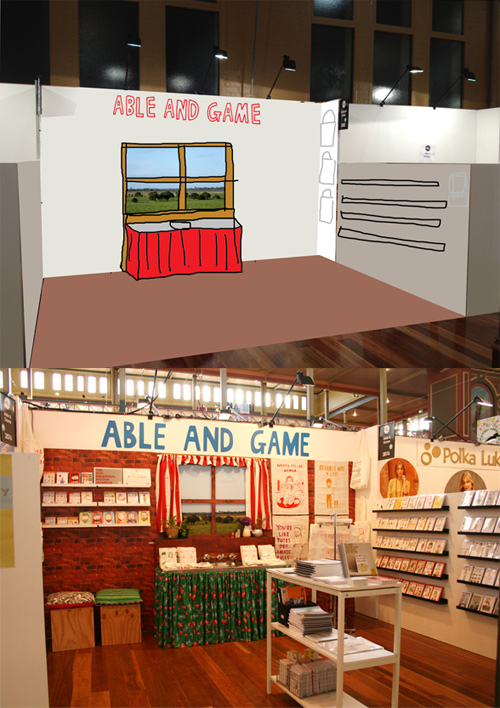