What Is The Deal With Boybands These Days? 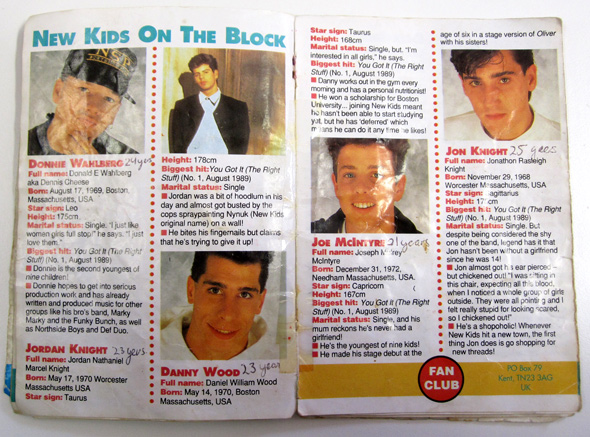 I don't watch much reality singing/talent/dancing shows but they seem to be filtering into my world a bit more than usual. They seem to be manufacturing boybands like we manufacture cards (grab six designs that work together and package them up) and they seem to appear so quickly.

It got me thinking about the boybands of my youth. I think they really missed out on the Beatlemania hysteria that seems to have resurfaced recently with bands like One Direction. I'm a little jealous because although from the outside it looks odd can you imagine how much fun being fully embedded inside a screaming frenzy would be?

When I was around 11 I liked NKOTB and I found the image above from a TV Hits mini book on pop artists circa 1991-1992 that I have still kept. My sister and I used to quiz each other on it so we know random facts like Vanilla Ice's real name is Robert Van Winkle and that Prince sleeps less than 4 hours a night.

I remember first seeing You Got It (The Right Stuff) on Video Hits and getting excited. I liked the formula of the tough guy, the goofy guy, the normal guy, the facial hair guy and my particular favourite, the cuter than a kitten guy (hello Joey McIntyre!!!). If you want to remember how awesome the early '90s was take a look at Step By Step.


In no particular order here are some of the things that go zing to me: dungarees, USA themed shirt, double breasted suits, dancing in unison, doing arm curls to build up the guns, when Donnie throws what looks like a perfectly good peach on the ground and grabs another from his pocket (?), Jordan singing step three it's just you for me in falsetto and finally Donnie's platted rats tail. Wow there was a lot of zing to unpack in 4 and a half minutes!