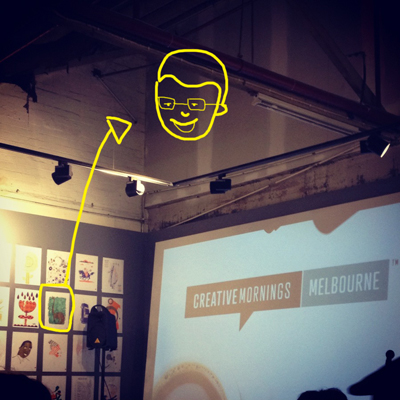 A few Fridays ago Gareth and I went along to the Melbourne Creative Mornings Talk by Dr. Amantha Imber.  A few weeks ago I saw this video of Creative Mornings founder Tina Roth Eisenberg talking about success in business. Around 2 minutes into the video she discusses her second rule: don't be a complainer make things happen and how she started a few different projects, including Creative Mornings, based this rule. The idea stuck with me and I tried to change my way of thinking about things that would usually be viewed as negative. I was also happy to learn that Creative Mornings had started in Melbourne.

The talk we went to was about creativity and making decisions. I learnt (or maybe even relearned) that decision making should happen in the morning, something I get wrong all the time. In the evening, if going out for a meal I often just want someone to decide on everything for me and having someone do that feels like such a luxury. It is so strange how the brain works sometimes.

If you're wanting to watch the talk it should be loaded up on the website soon and in the meantime there are two previous talks you can watch. We also got to have a look around the pretty amazing Compound Interest space and Gareth spotted a print from the recent Risographica 2 show that he decided he wanted to own very much.