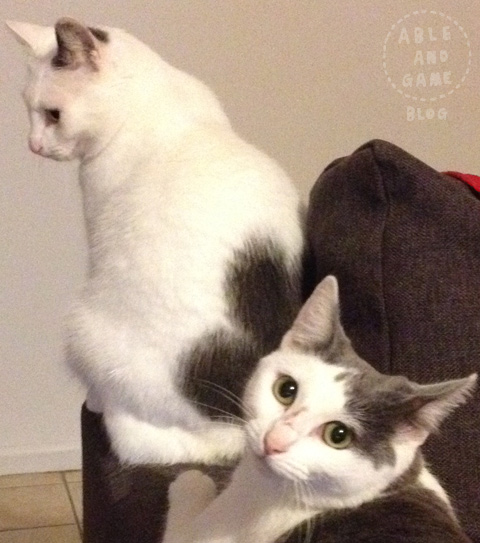 A few months before Clyde was born another litter of stray cats arrived at the office and there was one that looked just like Bubsy.  Gareth managed to tame her and although we had just shifted house and had a baby we decided we needed her in our lives. Before Bubsy Gareth wasn't really a cat person, he had allergies and thought they were a bit standoffish. Since we adopted Bubsy he has become crazy about cats. Maybe even more than me if that was possible. So even though we knew it might not have been the best timing we had to keep her as he would have been heartbroken when something would inevitably happen to her on the mean streets of Brunswick.

Her name is Cricket and she looks very similar to Bubsy but with a bit more grey. They are getting to know one another and it seems like they are getting friendlier, but there is still a fair bit of play fighting, possibly even real fighting going on. They can sleep near each other without too much trouble, so we are taking this as a good sign!

Adopting a stray cat isn't easy, they are not so adept at going to the toilet, but we figured we were more prepared after dealing and learning from Bubs. Although I think we have hit our kitty limit with two, so my dreams of becoming a Wacky Feline Woman with 11 will have to wait! You can follow Bubsy and Cricket on Instagram for updates on their antics.