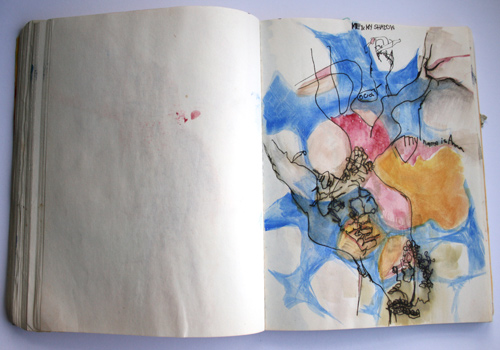 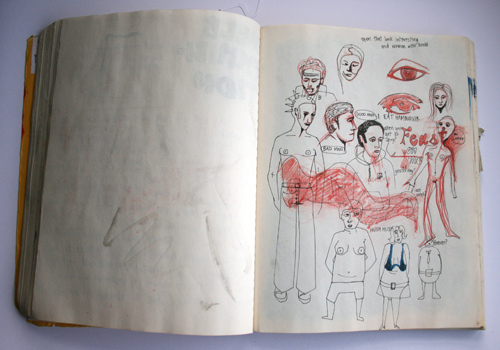 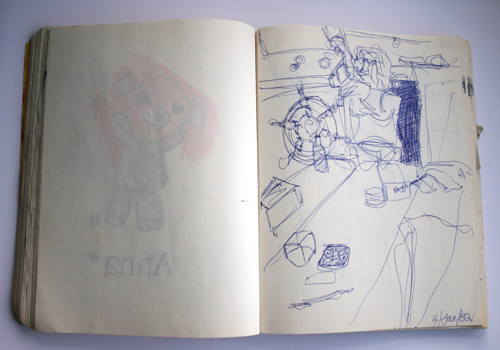 Here are some images of some of my sketchbooks from university. This sketchbook was called the magical utility sketchbook and I found it in the art supply shop at uni. Despite it being the cost of my weekly food budget, the bright yellow cover sucked me in and it was mine. I'm not sure why I thought it was magical, but I have written that on the cover, although with an odd drawing of a banana.

The first image is a drawing I did when I was in South Africa in 2002. I was on a camp/retreat north of Cape Town. It was a bit of an arty farty retreat where we slept in tents and spent the days drawing and talking about life and stuff. A little dog followed me around the day I spent drawing and I decided to call it shadow. I realised after spending the day with her the best type of dogs are the ones that look and act like cats.

The second image was just some random drawings that I think look a wee bit Able and Gamesque which is funny to look back on and see little ideas and drawing that were perhaps little seeds waiting to germinate.

The third was done on our boat holiday in Gippsland, I think that is my Mum sitting at the table and the date is the 4th of January 2002. Just after I finished University and was living at home and about to start work in a vegetable packing factory. One of the more glamorous times of my life!